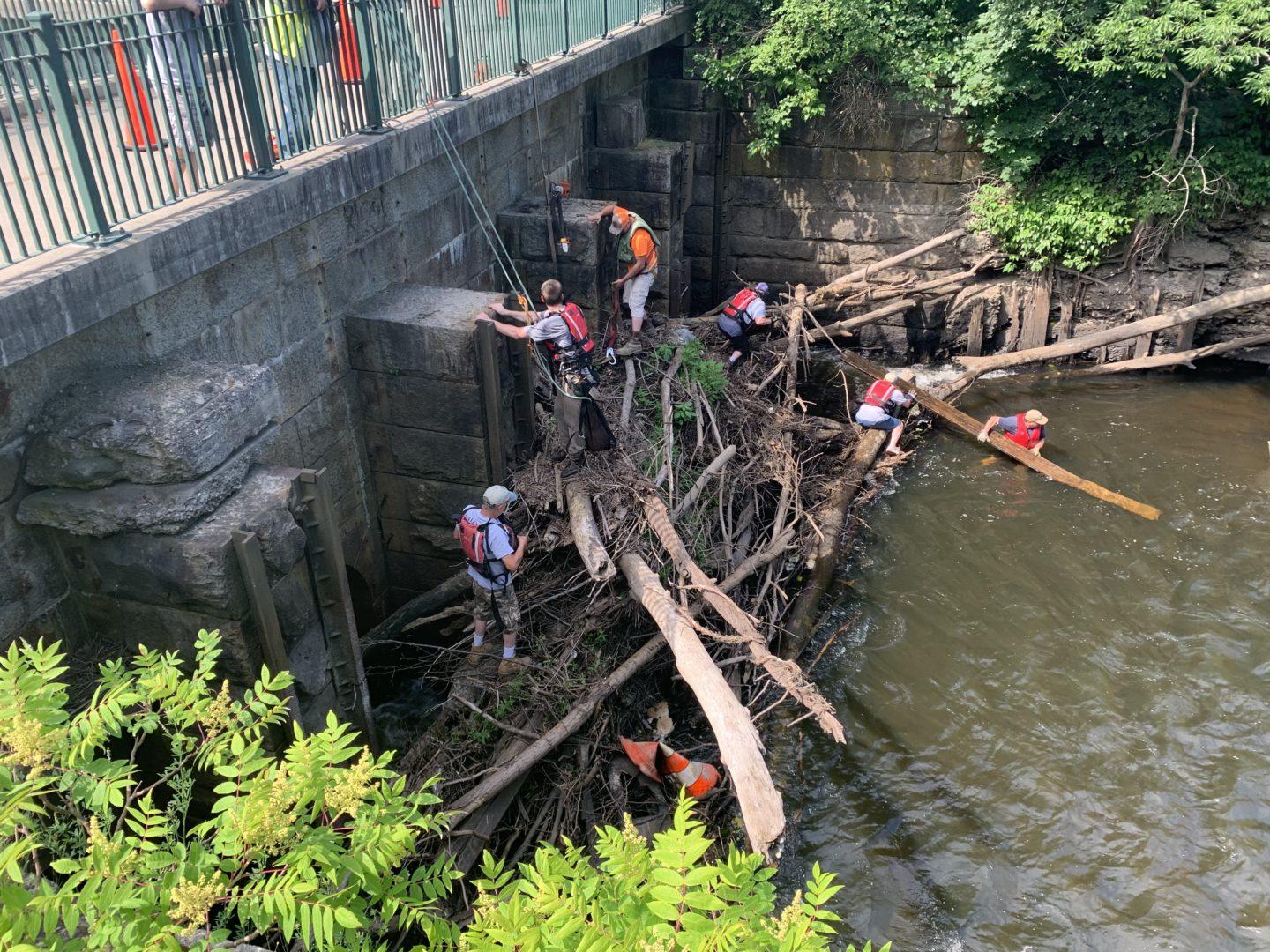 Ongoing river and completed projects include:

We clean the Pratt Dam each year and have been doing so for nearly 20 years. It is one of our most difficult stewardship projects and requires a huge support network to ensure it is done safely. Our first cleaning of the dam ‘the tubes’ started in early 2000’s when we saw a need to eliminate the debris.  We knew that cleaning the dam would help prevent upstream flooding while keeping the river safe for paddlers.

On July 6, 2019, we accomplished an epic clean-up of the Dam. It was epic because of the enormous pile of trees and debris. We had help from many people and organizations.  There were 10 people in the water and several people on land to assist us. We managed to eliminate the tangled trees and debris.  Special thanks go to the Valley Boys plus Paul, Mike and Francisco and all the onlookers for their encouragement and contributions.

See the full article in the Valley Breeze

or watch these videos of the event:

See other cleanup efforts we undertake yearly by going to our Volunteer page.

Based on a centuries old concept, the inherent qualities of Archimedes-based screw generators enable the development of renewable, clean electric power. They turn slowly, about 30 turns per minute. The mass of the water turns the tilted screw. The flow of that mass is controlled by hydraulically driven sluice gates. If fish enter the top of the machine, they simply ride down the screw in a large tub of water and swim out at the bottom, largely undisturbed. Turbulence at the outflow of the screw generator is minimal due to the fact that the water is not accelerated or diverted in these run-of–river generating sites.

A gearbox at the top of the screw drives the generator which produces standard three phase power for either the grid or direct users as state distribution laws allow. The entire facility is linked to an electronic monitoring and control system that runs automatically but communicates to an operator whenever requested. Safety, shutdown and management protocols are strict and efficient.

NEHC stated that typically construction will take four to six months and would occur during a low flow period for the river in June or July through September. Both dams would be worked on simultaneously. The two sites will provide enough electricity to power the equivalent of about 800 homes. The amount of kilowatt hours will be just under 5,000,000 per year.

BRWC/FOB will provide more information as it becomes available.

The Scott Brook Project was a collaboration of three groups: The Blackstone River Watershed Council, The Cumberland Land Trust, and the Cumberland Conservation Commission. Under the authorization of the Town of Cumberland, the project utilized 38 volunteers and over 828 volunteer hours to clean up 81 acres of land formerly used as a pig farm. The area is now part of the Cumberland Land Trust preserve.  This report details the work performed, the tons of scrap material recycled, trash collected, and shows before and after photos of different areas of the property.